After graduating from the Florida Academy of Massage in 1995, Patrick Emerson returned to the Fargo area and began his massage therapy career working out of chiropractic offices. After about 4 years he realized that his massage schooling had not prepared him to treat those who were suffering with pain.

Using the Relaxation/Swedish model taught to him in school, any positive results achieved with clients were temporary at best. The seminars Emerson attended at the time taught the “rub where it hurts” model, which he found to be ineffective. After 7 years of practice, Emerson was frustrated and worse, bored.

While driving to Bismarck for the ND chapter of the American Massage Therapy Association Convention, he was trying to decide how to tell his pregnant wife, along with their four and two year old children, that he might return to college to pursue a degree as a healthcare professional. That year the presenter at the AMTA Convention was Paul St. John. Emerson had heard good things about St. John’s method of Neuromuscular therapy, or Therapeutic Massage.

While listening to the presentation, Emerson was baffled as to why this method wasn’t being taught in every massage school in the country. This was the true massage therapy! When St. John demonstrated his therapy method, Emerson felt that he had seen a miracle and described the moment as the epiphany that gave him the realization he “did not have to go back to college and could stay a massage therapist!”. He now knew that Therapeutic Massage was what he was meant to do.

Since then, Emerson has attended all of the St. John’s seminars. He has been fortunate to have been taught by Paul St. John personally, as well as by his excellent instructors. Four years after his epiphany, Emerson became certified in the St. John Method of Neuromuscular Therapy.

Recently, Emerson has reached the Advanced Trained level of Primal Reflex Release Technique (the treatment of muscles after a traumatic event). He continues to be passionate about therapeutic massage and inspires to learn and to better serve those who suffer from pain and find themselves in his office. 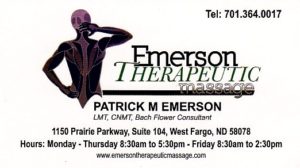